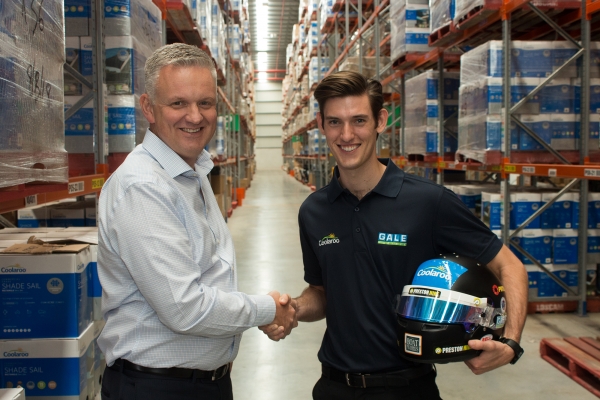 Third-generation driver Matt Brabham has celebrated this week’s season-opening Australian Formula One Grand Prix by signing an ambassador agreement with GALE Pacific for both Australia and the US.

Matt will carry GALE Pacific and Coolaroo branding on his race suit and helmet in this year’s PIRTEK Enduro Cup for Supercars as well as the Stadium Super Truck Series and will be involved in a mix of corporate events in both the US and Australia. He will also co-drive with Lee Holdsworth in the Sandown 500, Supercheap Auto Bathurst 1000 and Vodafone Gold Coast 600.

The deal was announced at GALE Pacific’s head office in Melbourne on the eve of Brabham taking up his regular role as an F1 Expert Host at the Albert Park circuit.

Matt, 24, is the son of 1993 Le Mans 24-hour winner, 1997 Bathurst 1000 winner and 10-time Indy 500 starter Geoff Brabham and the grandson of three-time world Formula One champion, Sir Jack Brabham. He has competed in karts and Formula Ford in Australia from the age of seven before heading to the US where he won both the F2000 and the Pro Mazda Series in record-breaking fashion.

Matt currently leads the Stadium Super Truck Championship after an overall win in round two in Adelaide earlier this month and heads to Long Beach in California for round three on April 13-15.

Matt is a very talented young driver who will be a perfect fit for GALE Pacific's brands and values. The international reach and his racing schedules in both Australia and the US will provide many opportunities for customers and staff of GALE Pacific.

For more information about Matt Brabham, visit his website.